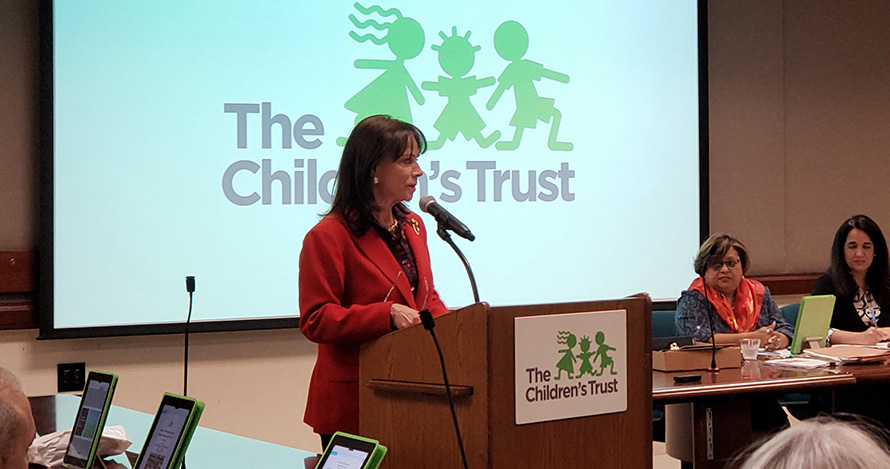 Florida ranks second in the United States in the number of human trafficking victims. The illegal industry that sells children and sex horrifically generates $32 billion worldwide, and with the Super Bowl coming to South Florida in early 2020 – attracting an estimated 150,000 visitors – the eye of the human trafficking storm will soon be disturbingly centered on Miami-Dade County.

Those were some of the facts laid out by Miami-Dade State Attorney Katherine Fernandez Rundle when she visited The Children’s Trust’s board meeting on November 18. Fernandez Rundle and her office are spearheading an anti-human trafficking campaign and an effort increase services to victims, known as #FixItStopIt which includes a 24-hour hotline to report cases and for victims seeking assistance. The number is 305.FIX.STOP (349-7867).

At the meeting, The Children’s Trust board unanimously authorized significant funding to go toward the effort. Immediately afterward, The Trust board went on to authorize additional spending for a local funding match to support human trafficking awareness and service to victims.

Honored to have addressed the Board of Directors @childrenstrust about our #EndHumanTrafficking efforts, our collaboration with stakeholders & community partners re the upcoming @MIASBLIV safety plan & our trauma-informed victims' services provided via our HT Task Force. pic.twitter.com/tWc8tXmnPW

“We have to find who the victims are, where they are and how we can rescue them,” Fernandez Rundle said. “We also have to hold the bad-guy perpetrators accountable.”

The state attorney said that while a flood of visitors would be coming to South Florida, the majority of victims would be local. “They are our kids. They are approached in our parks and in our foster care system,” she said. Fernandez Rundle would go on to say that the most vulnerable were as young as 11 and 12 years old, with the crux of victims between 12 and 24 years old. “They are our very young and babies.”

Although the spotlight is now firmly on human trafficking ahead of the Super Bowl, The Children’s Trust and several of its board members, including Steve Hope, Nelson Hincapie, and Constance Collins, have years of experience dealing with the results of human trafficking and its victims.

“Human trafficking is a plague that has affected Miami’s children and families for some time and The Trust has been indirectly dealing with its consequences for years,” said President/CEO James Haj. “With the Super Bowl around the corner, we are glad to join the effort to directly target human trafficking so that we can help put a stop to it, and equally as important, help care for those victims who have suffered already.”

Collins said that it was high time the issue got the attention it warranted. “I feel human trafficking has been long overlooked. The impact on our youth and children is (devastating) and it has received relatively little resources and funding.” Collins said. “I hope this is just the beginning.”

Hincapie agreed. “The grooming process begins very early on. We need to make sure we protect our children and prevent them from ending up in the hands of these monsters,” he said.

Trust Board Member and County Commissioner Barbara Jordan said that Miami-Dade children must be made aware of the threat.

“We need to warn teenagers about what’s coming with the Super Bowl and what to look out for. I want our young people not to be as vulnerable and education is a big piece of that along with law enforcement,” Jordan said, highlighting the value of the campaign being organized.

Victims of human trafficking and anyone with information on trafficking can call the 305.FIX.STOP hotline or visit www.stoptrafficking.info for help. Anyone looking for assistance and direction on resources available in Miami-Dade can call 2-1-1.