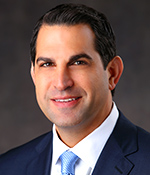 Mr. James R. Haj joined The Children’s Trust as president and CEO in April 2016. With Mr. Haj at the helm, The Trust has enjoyed one of its most successful periods. Trust investment in programs and services for children and families in Miami-Dade County has risen to its highest levels, while administrative expenses are at their smallest percentage in the history of the organization. He also led The Trust through the unprecedented challenges posed by the coronavirus pandemic, expanding its funding for emergency assistance programs, strengthening neighborhood supports and acting as an important voice for children and families during unprecedented hardships.

While leading The Trust, Mr. Haj has received numerous honors and accolades, including the prestigious 2022 MCCJ Silver Medallion Award, given to community leaders who have made outstanding contributions to our community.  His impact as head of The Trust was also recognized by proclamation by the Miami-Dade School Board in 2021. In 2020, he was named an Apogee Award recipient by South Florida Business and Wealth Magazine in 2020 and a panelist in the Miami Herald’s Florida Influencer Series, among other honors.

Mr. Haj previously served as an assistant superintendent of Miami-Dade County Public Schools, working as its chief negotiator with five labor unions representing more than 31,000 full-time employees. Before that, he served as administrative director for M-DCPS’ south and central regions, during which time he collectively oversaw 170 schools and nearly 200,000 students. In that capacity, he provided one-on-one support and guidance to principals and assistant principals regarding curriculum and instruction; state accountability and school improvement; teacher evaluations and professional standards; and crisis response plans and student safety.

Earlier in his career, Mr. Haj served as principal of Paul W. Bell Middle School and Southwest Miami High School, his own alma mater. He remarkably took the latter from a “D” to an “A” and significantly improved overall academic achievement, boosting graduation rates and championing inclusion for the school’s special needs population, which would become the largest group of students with disabilities put in classrooms with children who have no disabilities at any Miami-Dade high school.

Mr. Haj is a lifelong Miami resident who received an MBA in Business Management from the University of Miami and a BS in education from Florida State University. He and his wife, Karen, are parents of three children.