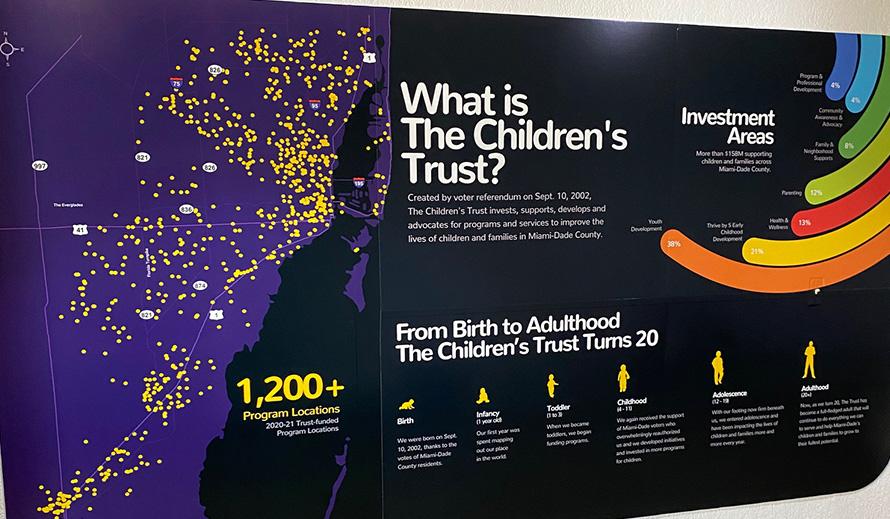 Museum exhibit will run for four months and show stories of impact, timeline and more

On Saturday, Sept. 10, The Children’s Trust celebrated the 20th anniversary of when Miami-Dade voters overwhelmingly approved the creation of a special taxing district establishing The Trust and setting in motion two decades of work improving the lives of all children and families in Miami-Dade County.

To mark this important milestone, The Trust is partnering with HistoryMiami Museum to show the history of the organization and the impact it has had in our county. From Sept. 10 to Dec. 11, the museum’s Community Gallery features an exhibition paying homage to twenty years of accomplishments at The Trust.

The exhibition includes several different facets, starting with a timeline of all the important and milestone dates in the history of the organization. Center panels  clarify the impact The Trust has had including engaging over 2.2 million children, families and providers, distributing over 3.4 million books, making possible 4.2 million student visits to Trust-funded school health clinics, and being responsible for the distribution of over 14.2 million meals and snacks to name a few.

As well as a numerical accounting of what The Trust has done, the exhibition also helps tell the story of three children whose lives have been impacted by The Trust. The children all overcame obstacles to develop into well-rounded and healthy adolescents and adults and are achieving inspiring successes. Their faces are part of the exhibition and their stories are told on a monitor that is part of the Community Gallery.

The history of The Trust itself is told in a 10-minute mini-documentary, The Children's Trust - 20 Years Nurturing Greatness, that is also shown at the exhibition. The documentary goes into the creation of the organization, the impact it has had and the involvement of Founding Chair David Lawrence Jr. in its establishment.

Just below the video monitor there is a display case with memorabilia compiled over the history of The Trust.

Finally, a proclamation approved by Miami-Dade Mayor Daniella Levine Cava and the Board of County Commissioners declaring Sept. 10, 2002, as “The Children’s Trust Day” will also be on display at the exhibit.

"We are excited to enter our 20th year of serving children and families in Miami-Dade," said James R. Haj, president & CEO of The Children's Trust. "This exhibition will feature the leaders who laid the groundwork for this critical work and some of the powerful stories of the children who have blossomed through the years in Trust-funded programs and initiatives. It truly showcases who we are and what we're about."

The exhibition is free and open to the public. The launch of the exhibit took place on Saturday, Sept. 10, and coincided with HistoryMiami’s monthly free Family Fun Day that featured music, arts and crafts, storytelling, a building blocks station, and exhibition tours.