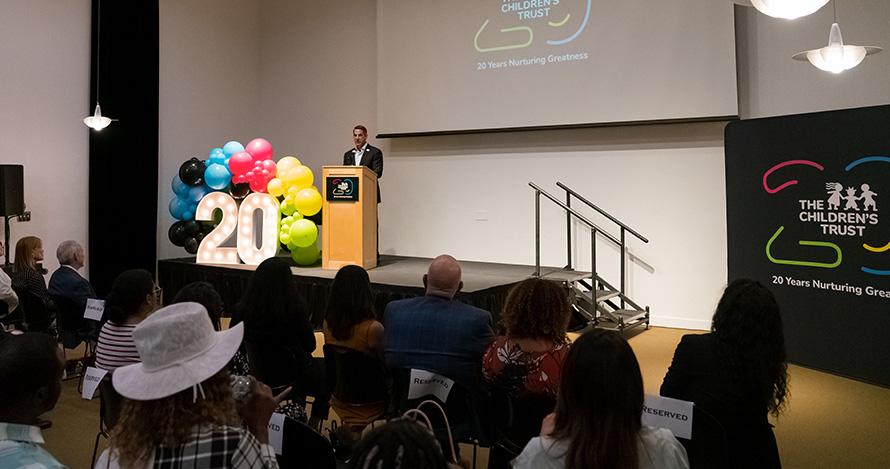 Trying to encapsulate two decades of work into a single celebratory event is a challenge in the best of cases. But The Children’s Trust is used to facing long odds and succeeding in overcoming them. On Sept. 10, The Trust held a special reception celebrating its 20th Anniversary and launching a HistoryMiami Museum exhibit telling the story of The Trust, while hundreds of children played nearby as they enjoyed Family Fun Day at the museum.

It was a fitting ceremony that brought together community leaders, child advocates, elected officials and other important figures in the history of The Trust to reflect on the impact that the organization has had on Miami-Dade County’s children and families.

“Twenty years ago, The Trust was authorized to help children and families in Miami-Dade,” said President and CEO James R. Haj. “Very few communities in this nation have an organization like The Trust to support the community. It’s very exciting to look back at the great work The Trust has done.”

Joining Haj to reflect on the profound impact The Trust has had were numerous elected officials, including Miami-Dade Mayor Daniella Levine Cava, who has supported The Trust since before it was even created.

“It’s incredible. The Children’s Trust has made such a difference here in Miami-Dade for the lives of children and their families. I’m so proud to have been part of The Trust even before the voters passed the referendum (creating it),” said the mayor. “Over the years, there have been many ways The Trust has helped build collaboration to launch initiatives that focus on big issues, whether its violence prevention, making sure children are ready to learn, or making sure neighborhoods provide a full range of supports for families. Those are so critically important for the future.

“I was part of helping create some f the priorities and innovations. I love the fact that The Trust has helped bring groups together to make an impact in different neighborhoods,” added Levine Cava.

Any celebration of The Trust would not be complete with the presence of David Lawrence Jr., the former Miami Herald publisher, who led the movement to create The Trust and then served as chairman of its board of directors until 2013.

Lawrence as featured in a 20th Anniversary documentary of The Trust, The Children’s Trust – 20 Years Nurturing Greatness, that debuted at the reception. Also shown at the reception, were two videos of youth whose lives have been impacted by The Trust. Those videos are part of the HistoryMiami Exhibition that will be on display at the museum in its Community Gallery until Dec. 11.

The exhibition also features a timeline of important dates in the history of The Trust, other important leaders who helped make it what it is, the overall impact The Trust has had and more.

The exhibit is free and open to the public and can be viewed during regular museum hours.

And while Haj talked about the importance of what The Trust has meant to the community over its first two decades, he also reiterated that more work still needs to be done. “We should be very proud (of what has been accomplished), but more importantly, we are looking forward to the next 20 years and how we can impact them.”

The stories we are showcasing are special but there are thousands and tens of thousands of stories, and just to know, we have the data, but to see the human element and see how The Trust has impacted these three young people's  lives is special.