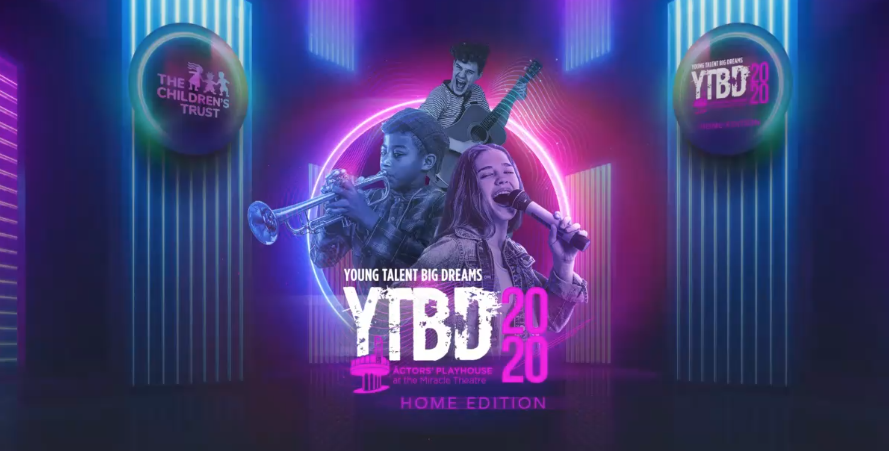 Actors’ Playhouse at the Miracle Theatre, together with presenting sponsor The Children’s Trust, are proud to announce the 2020 winners of Young Talent Big Dreams, the most widespread local youth talent contest in Miami-Dade history. A marathon of semifinal competitions for student performers ages 8-17 culminated in the virtual finals held on September 26, on YouTube Live. To date, over 3,200 individuals tuned in to watch the finals and its great performances. You can watch a video of the Finals at www.actorsplayhouse.org.

Prizes ranged from master classes and performing arts scholarships to cash awards and performance opportunities. This year, courtesy of WSVN CH7, the grand prize winner Jessica Olivera also received a free trip – including airfare and hotel – to attend the Teen Choice Awards in Los Angeles, plus $500 cash. Here is the complete list of winners:

The countywide competition, which began in January, had just wrapped up its second round of live auditions when the pandemic hit South Florida earlier this year, forcing the competition to shut down all in-person events. But organizers would not let COVID-19 close the curtain on Miami’s top talent. The competition then went virtual, with hundreds of young performers vying for a chance to win by submitting preliminary round audition videos that showcased their talents. The amount of auditions actually went up online with a 21 percent increase compared to the previous year. Participation was free and limited to residents of Miami-Dade County. The competition featured a total of six individual categories: pop/rock/rap vocals, musical theatre/jazz standards/classical vocals, dance, musical instrument, original spoken word and original vocal and/or instrumental composition. Group categories (six or fewer members) included dance, musical instrument/bands and vocal groups.

“Despite the transition from live stage auditions to virtual auditions in this unprecedented year, the 10th Anniversary Young Talent Big Dreams competition was better than ever,” said Actors’ Playhouse Executive
Producing Director Barbara S. Stein. “We are proud of all of the contestants who did a terrific job of submitting their auditions virtually and sharing their talent with us. Each and every participant is a true winner for making the effort.”

“Every year, Young Talent Big Dreams is a great showcase for the talent that the youth in Miami-Dade County possess. But this year it was even more,” said The Children’s Trust President and CEO James R. Haj.
“Despite the limitations and distractions imposed by the pandemic, the competitors refused to let the situation stop them. They showed that they would not let their talents be held down. What a show they put on!
Congratulations to all of them.”

Past winners of the competition include Zachary Roy who just reached the Semifinals on Season 15 of NBC’s“America’s Got Talent,” Joana Martinez who achieved a Top 10 placement as part of “Team Gwen (Stefani)” on Season 17 of NBC’s “The Voice,” Angelina Green who went on to earn the coveted golden buzzer from judge Heidi Klum on Season 12 of NBC’s “America’s Got Talent,” and Gino Cosculluela who brought home the third place title on Season 16 of FOX’s “So You Think You Can Dance.”