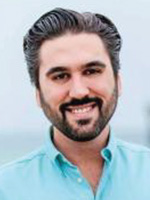 Victor E. Diaz-Herman is a native Floridian who was born and raised in Miami-Dade County to a Cuban American family. Mr. Diaz-Herman is a lesbian, gay, bisexual, transgender, queer and questioning (LGBTQ) activist and community leader. He studied at the University of South Florida and Florida State University.

Mr. Diaz-Herman is the chief executive officer of Pridelines, South Florida’s oldest direct services agency for LGBTQ people. His commitment to advancing lived and legal equality for all extends beyond his work at Pridelines, as he is a member of the National LGBTQ Task Force’s National Action Council, the board treasurer for the leading state-wide equality organization Equality Florida (501c3 and 501c4), the board treasurer for Miami Beach Pride, and a member of the Ad Hoc Anti-Bullying Task Force for the City of Miami Beach.

A recipient of the Miami Foundation’s Miami Leaders fellowship and the Victory Fund’s LGBTQ Movement Leaders fellowship, Mr. Diaz-Herman is committed to building a safer, more inclusive and affirming Miami-Dade County for its residents and visitors through vision focused leadership and mission-focused management that remains informed by the people he serves.