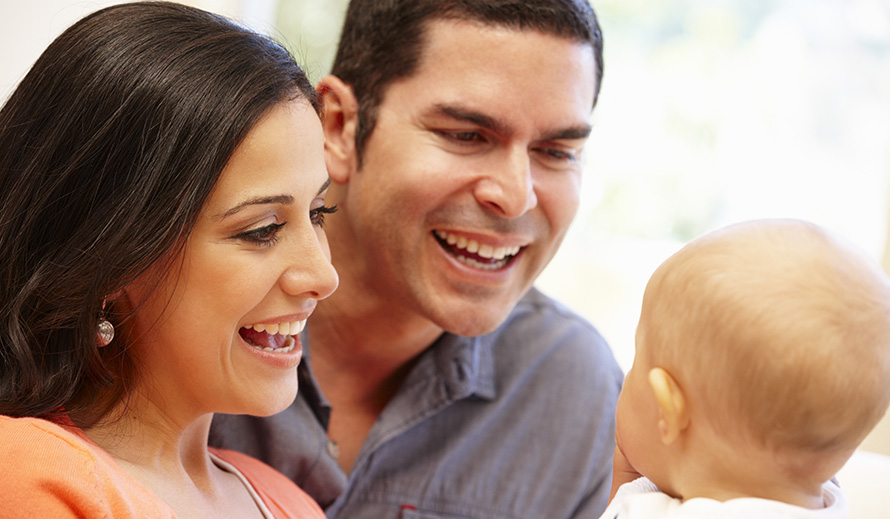 Did you know that the simple act of conversing with your young child will be one of the single most influential factors in their language skills down the road? According to a study by the University of California, Los Angeles, a two-way conversation between parents and their children, ages birth-4, resulted in a communication score that was six times higher than when parents simply spoke to their children. The same proved true when it came to reading. Without a child’s participation, a parent’s monologue resulted in a weaker link to language development.

Start early. Experts agree: Communicating with your child can’t begin soon enough. “We must begin talking to infants as early as possible – even as early as the prenatal period,” says Melissa Baralt, Ph.D., associate professor of applied linguistics in Florida International University’s Center for Children and Families. “Eighty-five percent of the brain is already developed by age 3, and it’s not preschools, caregivers or teachers who are with baby most during those most critical early months of life. It’s baby’s first and best teachers – their parents.”

Another factor is economics – research shows that by age 3, children from lower-income families are exposed to, on average, 30 million words less than those from higher-income families. “What we see in the research is that children with poor early language environments are less efficient at processing words,” says Baralt. “The switch from learning to read to reading to learn is harder for them. This is why positive early language environments – like talking with your baby – are so critical for developing literacy.”

In an effort to close that word gap Baralt created award-winning app Háblame Bebé, designed to maximize language development and nurture bilingualism among Hispanic infants. Encouraging parents and caregivers to speak to their children in their native tongue introduces a child to more words because the caregiver has a broader vocabulary range in that language, Baralt explains, and it introduces bilingualism early on.

Talk back and forth. Baralt suggests asking your baby questions, narrating what’s going on while you have their attention and using descriptive language to make the most of everyday conversations. “Describe what you’re doing, what you see… talk as much as you can to your baby! And get them to talk back to you,” she stresses. “It’s the back-and-forth turn-taking that makes a difference. Babies are gifted at doing this with sounds even before they begin saying words.”

Baralt also advises speaking in the language in which you feel most comfortable expressing yourself. “If you use your native language, you are promoting bilingualism in your baby, and that is one of the greatest brain gifts you can give to your child,” she says.

Get on their level. While the quality and quantity of your words count, it’s not just about “talking the talk.” How you physically interact with your young child while conversing with them makes a huge difference in their aptitude for language.

Being on the same level as them – face-to-face – and maintaining eye contact shows them that they have your full attention and interest, which serves to give your words more weight. It’s what Dana Suskind, M.D., pediatric otolaryngologist and author of Thirty Million Words: Building a Child’s Brain, refers to as “tuning in” – because it’s during shared attention with your baby that they learn words best.

And of course, make books a part of your lives. “I recommend reading before bedtime as a good routine to establish,” says Baralt. The practice of doing so every day benefits you both as you share in the joy of their discovering new words – and new worlds.