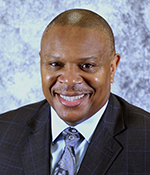 Morris Copeland has dedicated his entire professional life, over 30 years, to serving Miami-Dade County’s at-risk youth and their families. In November of 2020, Mr. Copeland was appointed to the leadership role of Miami-Dade County’s Chief Community Services Officer by the Honorable Mayor Daniella Levine Cava, Miami-Dade County’s first-ever female Mayor. As part of his portfolio, Mr. Copeland oversees the social services departments whose mission is to support and empower Miami-Dade families with services such as, childhood development, safe housing, domestic violence support, advocating for at-risk youth and their families, and many more vital resources.

In 2011, Mr. Copeland was appointed Director of the Miami-Dade County Juvenile Services Department (JSD), formerly known as the Juvenile Assessment Center (JAC), which opened in 1997.  The JSD is recognized nationally and internationally for the humane and innovative services provided to at-risk youth and their families, with the ultimate goal of preventing these youth from entering or going further into the criminal justice system. Mr. Copeland served as the Deputy Director of JSD (2007-2011). During his tenure as Deputy Director, the JSD model was highlighted in May 2008 at a summit hosted by the White House Office of National Drug Control Policy (ONDCP) and the U.S. Department of Justice: Office of Juvenile Justice and Delinquency Prevention (OJJDP).

Mr. Copeland serves as an Instructor for the Georgetown University Center for Juvenile Justice Reform, and as an Advisor to The National Advisory Committee of the International Association of Chiefs of Police. Mr. Copeland currently serves as a Board Member of the Miami Children’s Initiative, the Urban League of Greater Miami, Inc., Gang Alternative, Inc., and the National Assessment Center Association.

Mr. Copeland is a native of Miami-Dade County. His alma mater is University of Colorado, and is a proud member of Kappa Alpha Psi Fraternity, Inc.

Appointed by virtue of his position.