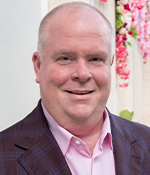 Mark A. Trowbridge is the president and CEO of the Coral Gables Chamber of Commerce, a position he has held for the past fifteen years. He is the chief association executive responsible for the day-to-day success of the more than 1600-member organization, working with volunteer leaders engaged in the Chamber’s long-term business development strategies and community initiatives. The Coral Gables Chamber is ranked as the number two Chamber in South Florida according to the 2021 South Florida Business Journal’s Book of Lists.

Some of Mr. Trowbridge’s accomplishments at the Chamber include elevating the profile of the organization in the community while building robust programs centered on member growth and advocacy, small business, economic development and tourism. In addition, the Gables Chamber is a best-practice leader in such national movements as Small Business Saturday, a local Permitting Assistance Program, as well as heralded community events like Burgerliscious and our awards programs.

Prior to joining the Chamber, Mr. Trowbridge was Deputy Executive Director for Business Development for the Miami Parking Authority in the City of Miami. He also has worked with the National Football League and local South Florida Host Committee to produce Super Bowl XXXIII and led a volunteer corps of more than 8500 individuals. Previous to that, Mr. Trowbridge was the Director of Student Activities at the University of Miami, where he began his career in Greater Miami following graduation from the University of Florida.

His community involvement includes Past President of the national board for the University of Florida Alumni Association and is a Past President of the award-winning Gator Club® of Miami. He served as Program Chairman of Leadership Miami, where he was honored with the Bill Colson Leadership Award. Mr. Trowbridge is an Executive Board Member for Seraphic Fire and serves on the boards of the Miami-Dade Beacon Council, as well as Chairman of New World School of the Arts Executive Board and Treasurer of The Children’s Trust. He also serves on the Board of Trustees of Actors’ Playhouse and City Year Miami.

Mr. Trowbridge received his Bachelor and Master of Education degrees from the University of Florida in 1990 and 1992, respectively. He has lived in Miami Springs, Florida for the past 17 years, with his faithful canine companion Sir Winston Churchill, having moved to South Florida eight weeks before Hurricane Andrew struck in August of 1992.