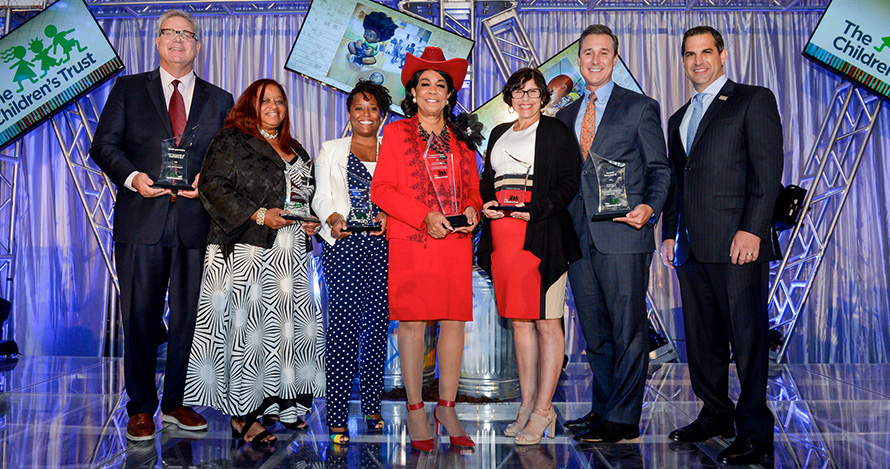 Wilson was among six individuals and organizations honored at the ceremony, commonly called the “Oscars of Child Advocacy.” She and her peers demonstrate the critical strides being made in bettering the lives of Miami-Dade children and families. While they celebrated their achievements at the August 25 event, they also inspired up-and-coming nonprofits and local leaders in attendance to follow in their footsteps.

“Over the years, we’ve toasted Miami-Dade’s network of child and family advocates at the annual Champions for Children event,” said James R. Haj, president and CEO of The Children’s Trust. “We have watched this community of selfless, motivated individuals grow as they partner with local organizations and lobby for new, impactful changes to legislation. It’s an honor to recognize their efforts and encourage growth in our field.”

The event also recognized the 15th anniversary of The Trust, which was established in 2002, and the legislators who made its creation possible – former State Senator Ron Silver and former State Representative Gus Barreiro, and former Miami-Dade County Commissioners Katy Sorenson and Jimmy Morales. They, along with David Lawrence Jr., The Trust’s founding board chair and an instrumental force behind establishing the organization, received a thunderous standing ovation.

In addition to networking with many of Miami-Dade’s most dedicated child and family advocates, the nearly 800 attendees enjoyed performances by participants of the Young Talent Big Dreams youth performing arts competition, and took part in an auction of a diptych created especially for the event by multitalented Daniel “Krave” Fila, whose vibrant large-scale murals inspired the day’s urban theme.

To learn more about The Children's Trust, visit www.thechildrenstrust.org. For event photos or additional information, please contact Meieli Sawyer at The Weinbach Group at 305.668.0070.