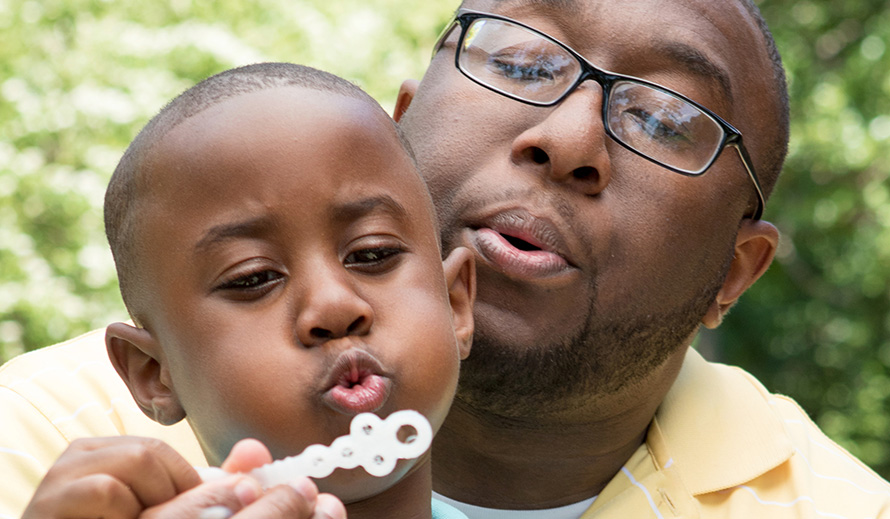 The Importance of Fathers

Every time a father – or father figure – shows what it means to be present in his children’s lives by role-modeling patience, compassion, listening skills and attunement to their needs, he’s shaping them into people with integrity who can positively impact the world.

Research shows that children whose fathers are genuinely involved in their lives do better in school, demonstrate sound psychological well-being, lower levels of delinquency and ultimately attain higher levels of education and economic self-sufficiency. And experts say it’s easy to ensure your interactions are packing the greatest punch.

Hook ’Em With Books
When your little one squeals, “I want Daddy to read me a bedtime story!” the opportunity for bonding yields greater benefit than you might think. A father’s tendency to dramatize the reading with different animated voices and masculine inflections not only entertains and stimulates a child, but also, according to Kyle Pruett, M.D., author of Fatherneed: Why Father Care Is as Essential as Mother Care for Your Child, “reinforces the idea that words can be a symbol of important pleasurable emotions [between father and child].”

Apart from the entertainment value, research also shows that health benefits abound when a father reads to his child. “We’re finding that when dads step away from their electronic devices and sit down to share a story with their child, both their heart rates slow and they relax physically and mentally,” says Holly Zwerling, CEO/president of the Fatherhood Task Force of South Florida.

Be Their #1 Playmate
Sharing a favorite book is just one of many little interactions that can have a big impact on your child when Dad is initiating them. As Pruett notes, fathers show a tendency to stimulate their children in more unpredictable ways than mothers in order to interact with them. And that unpredictability factor can translate as pure fun for a kid, regardless of their age. Consider the father who comes home from work one day and greets his child by picking them up and swinging them through the air. In taking a playful approach like that to reconnect after being absent, a father’s physicality with his child is experienced as exhilarating.

But it also provides children with more than a momentary thrill. As childhood development experts such as Daniel Paquette, Ph.D., professor of psychoeducation at the University of Montreal believe, this kind of disruptive behavior is a common way for fathers to enter their child’s world, which, in turn, enables kids to open themselves up to the world around them.

Citing Paquette, Paul Raeburn, author of Do Fathers Matter? What Science is Telling Us About the Parent We’ve Overlooked, notes that “children’s need to be stimulated, pushed and encouraged to take risks is as great as their need for stability and security.” A father’s unpredictability “helps children learn to be brave in difficult situations or when meeting new people,” says Raeburn. Good-natured teasing and even the occasional rough-and-tumble play initiated by Dad can have a positive impact on kids, he adds, as it teaches them how to handle unexpected situations.

Spend Time With Them
According to a report by the U.S. Department of Health and Human Services, current research shows that the importance of quality time with your kids is ongoing.

“Fathers should maintain the active, physical and playful style of fathering as their children age,” states the report. “In other words, when it comes to father-child fun, active pursuits like tossing a football, playing basketball, hiking or going to the library are more valuable than spending time in passive activities such as watching television – for their relationship and for their child’s emotional well-being, social development and physical fitness.”

The report’s findings further reveal that doing productive activities with your children, such as household chores like washing dishes after dinner or cleaning up the backyard, promote a sense of responsibility that is, in turn, linked to greater self-esteem, academic and occupational achievement, psychological well-being and civic engagement later in life. So stay involved and make every minute spent with your child count!