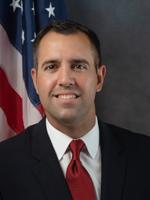 Juan A. Fernandez-Barquin is the State Representative for House District 119, which includes the majority of West Kendall, Florida. He currently serves on the Business & Professions Subcommittee, Children, Families & Seniors Subcommittee, Criminal Justice Subcommittee, Justice Appropriations Subcommittee and Judiciary Committee. He is an attorney with Genovese Joblove & Battista, P.A.

Previously, Mr. Fernandez-Barquin was an assistant public defender for the Office of the Public Defender, 15th Judicial Circuit of Florida for Palm Beach County. He also serves in a number of nonprofit capacities, including as the Chairperson for the Board of Directors for the Hearing and Speech Center of Florida, Miami-Dade County's largest nonprofit provider of hearing and speech language therapy services. He previously served as an adjunct professor at Miami-Dade College and taught Computer Assisted Legal Research and Business Law I. Mr. Fernandez-Barquin is a graduate from the Greater Miami Chamber of Commerce Leadership Miami program, where his team sponsored and built a playground for Lotus House, a homeless shelter for women and children, and he is also a Belen Jesuit Preparatory School Alumni Delegate.

Term: Effective January 2020; appointed by virtue of his position.