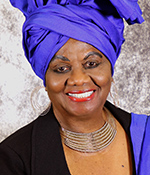 During her distinguished career in the Miami-Dade County Public Schools, Ms. Bendross-Mindingall initiated programs that promote mentorship, improve attendance and increase parent involvement. As a state representative in Tallahassee, she served the citizens of Miami.

In 2010 and 2014, voters elected her to serve as the school board member for District 2, allowing her to follow her passion – improving the education of children and families. In 2015, she was elected by her colleagues as the first African-American female vice chair of the Miami-Dade School Board.

Appointed by virtue of her position.