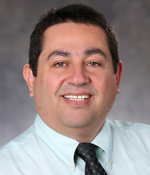 Erik joined The Trust in February 2004. With more than 23 years experience in systems design and development, Erik previously worked as a systems analyst for the Miami-Dade County Department of Environmental Resources Management, Florida's Department of Children and Families District 11 and Blue Cross/Blue Shield of Florida.

He is an expert in relational database modeling, networking, Unix/Linux administration and computer programming. Prior to moving to the United States in 1999, Mr. Pinzon was a successful consultant for a number of large-size companies in his native Colombia, where he earned a B.A. (Mechanics) from ECCI.