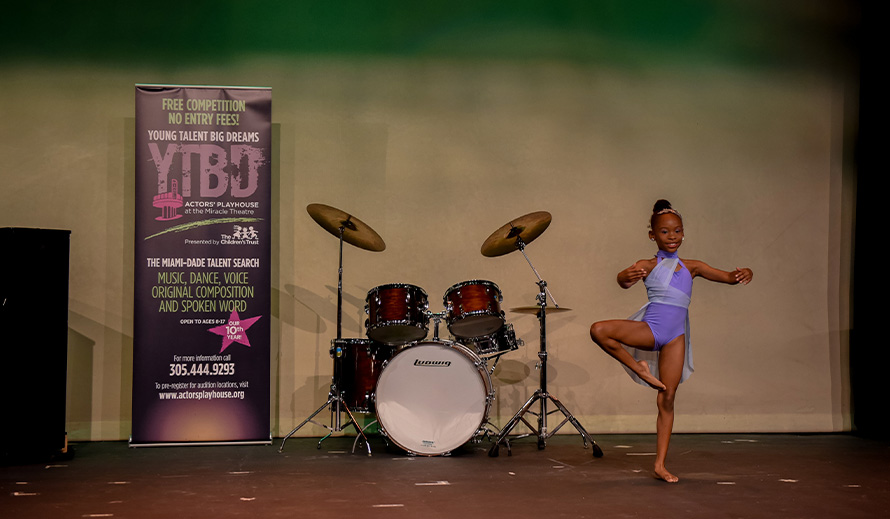 The show must go on, and does as Actors' Playhouse competition continues online

Among the far reaching and most negative aspects of the current coronavirus pandemic is that it has put so many important life events on hold for our youth. High school graduations, spring break and summer trips, and even getting together with friends have all been suspended. For a while, it looked like another of Miami-Dade County’s favorite youth past times, the annual Young Talent Big Dreams competition – the county’s largest youth talent competition – would suffer a similar fate. It hasn’t. The show is back on and it could be better and bigger than ever.

Actors’ Playhouse at the Miracle Theatre, together with presenting sponsor The Children’s Trust, have gone virtual to reopen auditions for the 10th anniversary season. The countywide competition, which began in January, had just wrapped up its second round of live auditions when the pandemic hit South Florida earlier this year and was shut down along with the rest of most activities. But organizers would not let COVID-19 close the curtain on all the artistic talent in the county in this year's show.

Parents! Now is the time to take your child’s talent to the next level. We are calling all #dancers, #singers, #musicians, #spokenword artists and #composers to sign up today!??????????? As we continue to flatten the curve and #StayHomeMiami, we invite you to submit a 1-minute preliminary round audition video online for @ytbigdreams! What are you waiting for? Submit your child’s video TODAY! Go to www.StayHome.Miami or click the link in our bio. ?#MiamiKids #MiamiDade #KidsTalent #kidsWithTalent #Youth #MiamiDadeCounty #Talent #OnlineAuditions

“These unprecedented times may have caused a change in plans for our 10th anniversary season of Young Talent Big Dreams, but it won’t stop us from celebrating this milestone year with all of the wonderful young performers who are eager to share their talents with us,” said Barbara S. Stein, executive producing director of Actors' Playhouse at the Miracle Theatre. “Now, as they say in the biz, the show must go on!”

While staying safe at home and practicing social distancing, kids between the ages of 8-17 are invited to submit preliminary round audition videos that showcase their talents. Prizes remain the same and they range from performing arts scholarships, cash awards and performance opportunities, plus tickets to local cultural attractions and theaters. The grand prize winner will receive a free trip – airfare, hotel and passes for two – to attend the live Teen Choice Awards, courtesy of WSVN 7News, along with $500 in cash.

The first round of online auditions already took place and talented kids from across the county will have until May 18 to submit preliminary round auditions. Those interested in registering for the new online competition should go to StayHome.Miami, The Children’s Trust’s new website with activities, resources and other fun features, for more information. Participants may compete in one individual and one group category only.

While the auditions are moving forward online, initial plans have the semifinals in late August and finals in late September taking place in front of a live audience at Miracle Theatre like in years past, if conditions allow it. "The Children's Trust believes in the healing power of music and dance. We've always supported the Young Talent Big Dreams competition as a way to showcase youth and share the best of our community," said President and CEO of The Children’s Trust James R. Haj. "In times like these, we need Young Talent Big Dreams more than ever and I'm proud that we can move forward with a virtual competition. I'm looking forward to seeing this year's talent."

The talent competition features a total of six individual categories including pop/rock/rap vocals, musical theatre/jazz standards/classical vocals, dance, musical instrument, original spoken word, and original vocal and/or instrumental composition. Categories for groups of six or fewer members include dance, musical instrument/bands and vocal groups. Contestants must follow all current government guidelines and restrictions related to the coronavirus (COVID-19) pandemic when preparing any audition materials for submission. Groups are encouraged to collaborate online to create their audition videos. Participation in the competition is free of charge and limited to residents of Miami-Dade County.

Each act will be allotted up to one minute during their preliminary round video performance and two minutes for the semifinal and final-round performance. There will be a maximum of nine winners and one grand prize winner chosen during the finals. Young Talent Big Dreams is modeled after reality TV talent shows that offer similar opportunities to contestants through a series of auditions, performances and professional mentoring. Judges include a host of local celebrities and professionals from Miami’s performing arts community.

Past winners of the competition include Joana Martinez who just achieved a Top 10 placement as part of “Team Gwen (Stefani)” on Season 17 of NBC’s The Voice, Angelina Green who went on to earn the coveted golden buzzer from judge Heidi Klum on Season 12 of NBC’s America’s Got Talent, and Gino Cosculluela who most recently brought home the third place title on Season 16 of FOX’s So You Think You Can Dance.