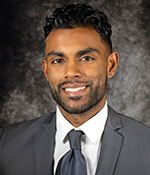 With more than six years’ experience in software system testing and project management, Mr. Minott previously worked as a manager-analyst at Digicel Diaspora Telecommunications, and United Ship Service as a computer programmer.

Mr. Minott is an expert in user support, application testing and analytical reporting. Prior to the exposure in the professional work environment, he attended Florida International University where he earned his B.S. in computer engineering in 2011; he completed his M.S. in engineering management in 2016.

Mr. Minott is very active in the community and likes to spend his free time giving back whenever he has a chance. He most recently volunteered with the Miami Rescue Mission to help feed the homeless in downtown Miami, and with the Little Lighthouse Foundation, where he donates toys to underprivileged children.