Affiliation:
Member selected by a coalition of the local chambers of commerce
Nominating Committee 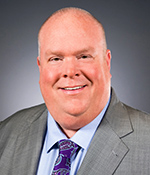 Mark A. Trowbridge, who joined The Children’s Trust Board in April 2015, currently serves as the president and CEO of the Coral Gables Chamber of Commerce, a position he has held since 2006. As chief executive, Mr. Trowbridge works with the volunteer business leaders of this 1,600-member organization to generate business development strategies and community initiatives. Prior to his position with the chamber, Mr. Trowbridge was deputy executive director for business development for the Miami Parking Authority and previously served as director of development and training for Switchboard of Miami.  A career nonprofit leader in our community, Mr. Trowbridge has a background in fundraising, development, board engagement and volunteer management.

Mr. Trowbridge serves on the executive boards of Seraphic Fire, New World School of the Arts as Vice Chairman, Super Bowl LIV Chair of Volunteer Engagement and as a board member of the Miami-Dade Beacon Council – where he is on the Steering Committee for the One Community One Goal initiative.