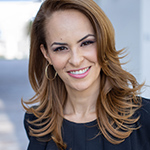 She has held various leadership roles in the public sector, serving as Chief of Staff to Miami-Dade County Commissioner Danielle Cohen Higgins, proudly serving the residents of District 8. She also served as District Director of Communications for Miami-Dade County Public Schools (M-DCPS), the fourth largest school district in the nation and as M-DCPS Director of Community Engagement, where she worked to strategically implement and maintain long-standing and high-value partnerships between the school system and corporations, small businesses, government entities, funders, community-based organizations, and community leaders.

She is a mother of two and strongly believes ensuring equitable access to safe environments, health resources, and education and workforce opportunities for all children and teens is the key to making Miami-Dade a better community. If you are interested in meaningful and effective partnerships that serve children and families, please don’t hesitate to contact her at natalia@thechildrenstrust.org.